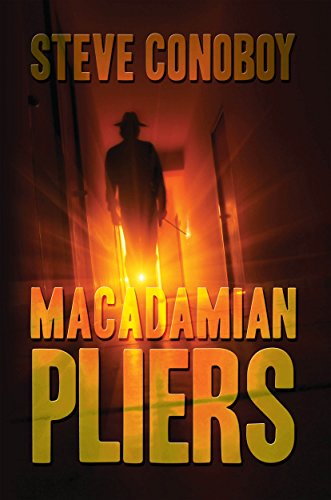 This book has a strange and awesome title and an equally awesome story. There is no way for you not to be caught up in this freaky mystery. Cherry Rains and her family are moving into a new house half a state away. She plans on never calling it home, as moving was never her idea. Her goofy brother, Frank, has already tried to claim the attic as his bedroom. Thankfully, she won’t have to listen to him stomping overhead every night, since Mom vetoed that plan.

Not only is Cherry upset about the move, but the realtor is a real creep, too. He has a strange body shape, seems to walk around on silent, kitty feet, appearing near her when she is most vulnerable and alone, has a wicked missing eye, and the other eye stares mercilessly at her. Don’t forget the long, knobby fingers that are never still. Cherry is truly frightened when she notices him standing outside their house at night, his fingers moving rapidly or appearing to wave a stick. What could possibly be going on?

Frank, on the other hand, has found a new friend, Jack, and a haunted house! On the way to school they walk by and Cherry decides right then and there that she will never, ever go in. However, Jack and Frank are already plotting when they will take a peek. Adding more excitement to their lives, packing boxes begin to hop up and down, doors slam, and even a bathrobe assumes the shape of a human and floats towards them. When Mom receives a nasty bite on her arm, Cherry decides she has had enough. There must be some way to rid themselves of these nasty spirits. She enlists Frank and Jack to help her research ghosts and other scary things. She’s stunned to find that there seems to be an overabundance of these in town.

This is just the tip of the iceberg. The characters are so engrossing that I enjoyed pursuing the story of each one. They are all interestingly intertwined to give us an engrossing tale. This is not your usual woo-oooo story; at no time was I creeped out, bored, or wishing it would just end. This has a cliffhanger ending, but a sequel is not mentioned. I was fine with the end, since it all came together nicely, but you do have to wonder…*a little Twilight Zone music here, please*

Now for the rating:

Find it here on Amazon