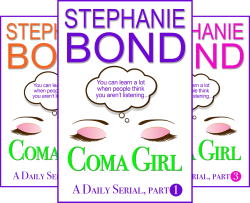 This is the story of Marigold, who has been injured in a head-on car accident, and is now in a coma. Her sister, Sydney, is in her third year of law school, but has decided to stay home and help her parents with the care of Marigold. Even though she is in a long-term health care center, her family spends as much time as they can with her. Instead of drawing this dysfunctional family together, they find further irritations flaring between them. As for Marigold, she may be in a coma, but she is far from being asleep.

She might be in a coma, but her life is far from dull or lacking in visitors. So-called eavesdropping, Marigold discovers that her car was hit by a flashy, yellow Jaguar, driven by a pro football player. It is said that he was drunk, but until the police declare it so, the family waits for what they think will be justice. Since Marigold’s situation is receiving a great deal of attention, Syd decides to promote a Facebook page with details of Marigold’s life in a coma and offer mugs, t-shirts, and any other item she can think of to sell her story. Marigold is not too sure about Syd putting makeup on her face, a nice scarf on her head to hide the surgical scars, and painting her nails. She already knows she has several scars on her face and would rather not flaunt it, but what is one in a coma to do when their picture is taken? Before long, she is no longer Marigold, but officially Coma Girl.

She has a police detective who is investigating the accident, and is surprised when he starts spending Sunday afternoons with her watching baseball games. He always brings a greasy meal with enticing aromas and tells her if she doesn’t eat her share, he will. Who knows why he comes, but she enjoys his company and before long he is telling her about his rather tangled love life. Marigold’s aunt Winnie sneaks her psychic into her room, knowing the family would frown on this kind of visit. It is entertaining for Marigold to listen to the psychic sell her aunt classes and items that should help Winnie break through Marigold’s coma, and it comes as a surprise that sometimes this woman is almost on target with her predictions…almost. There is the doctor who hangs an iPod on her bed that plays classical music, which she hates, twelve hours a day. There is the nun that visits Marigold and her roommates, three other women also in comas. Who knows why she picks Marigold, but she is the one the nun chooses to whisper her dark secrets to. Marigold also listens to the nurses who care for her and finds them to be full of secrets, also. Then there is the mysterious visitor whom she begins to look forward to.

It is safe to say there is never a dull moment and lots of entertainment for readers. I haven’t found this kind of ‘funny’ in a book for a while. This story is a serial with six parts. Members of Amazon’s Kindle Unlimited can read them for free.

This is a very good story, giving readers some questions on just how deep under coma victims are, and an appreciation of Marigold’s dry wit. I give this book ⭐️⭐️⭐️⭐️⭐️ stars.